Out of the box, the editor provides a tool for uploading, rotating, and cropping images. To see a preview, open the index.html file in the /sandbox folder of the repo in a browser. Whilst in editing mode select a paragraph of text and click the image tool in the toolbox. Once the Image dialog opens, upload an image from your computer (it doesn't matter what you select as the process is faked).

Once your image finishes fake-uploading, the dialog will change to something like the image below with options to rotate and crop: 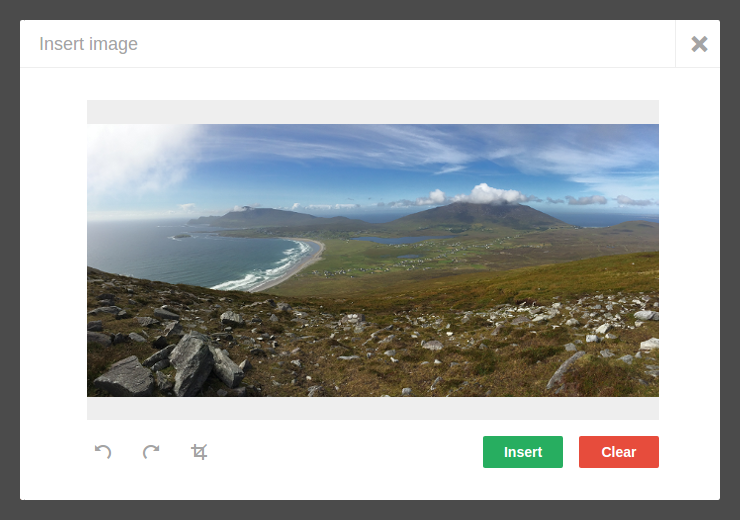 After an image has been inserted into the page it can be resized by clicking in any corner and dragging.

This might sound like a cop-out, but one option to consider is simply not supporting image uploads. If you're implementing a small hands-on site and you're saving content in HTML or template files (see the Saving strategies tutorial) then you might opt for the DIY approach. For this site I use Gimp to create my images and then manually add them into the relevant template with an <img> tag. I can still reposition/align my images within the content - and I saved myself all of the work that's ahead of us.

This definitely is a cop-out - I won't be presenting any server-side code in this tutorial and the implementation is left to you, however I will be laying out the requirements for server-side code as well as discussing and recommending approaches.

To make the image tool work we need to add both server-side code to store the image and perform any editing operations, and client-side code to interface between the browser and the server. The following diagram outlines the process for uploading images:

Return a different URL after each operation. Browser's cache images and the image will not update if the URL remains the same. A simple technique if you want to retain the existing URL is to simply append a random parameter and value (e.g /path/to/draft/image.jpg?_ignore=83273), this can be achieved server-side or client-side.

Communicating with the ImageDialog events

The browser needs to be able to relay the user's actions in the image dialog to the server and translate any responses into updates to the dialog and finally the page. This task client-side is managed by a function or class that we term the image uploader.

In reality our image uploader is a function that receives an instance of the ImageDialog each time it is created (e.g when the user clicks the image tool), and binds functions to handle each of the events which the dialog can trigger. The following events are triggered by the image dialog:

Triggered when the user decides to cancel uploading an image part-way through the upload.

Triggered when the user clears the current image from the dialog.

Triggered when the user selects a file to upload. This event is triggered with the selected file as the first argument.

Triggered when the user requests the image is rotated counter-clockwise.

Triggered when the user requests the image is rotated clockwise.

Triggered when the user selects to insert the image.

Triggered when the dialog is closed.

Triggered when the dialog is cancelled by the user either by selecting the close button or pressing escape.

This event is not namespaced and is a standard dialog event, I've included it as it can be used to remove an uploaded image if the user cancels the dialog.

A blueprint for image uploaders

The following code is a functional blueprint for writing an image uploader, that is it would work provided the server-side code was also in place (and you're using a modern browser):

We're going to cover event handlers separately; each handler would be defined inside the imageUploader function as indicated.

When the user cancels their upload we abort the upload and set the dialog to an empty state (the other dialog states are populated and uploading).

If the user clears the current image then we clear the dialog along with any existing image data. You might also choose at this point to call the server and request that the image is removed (see Temporary images).

When the user clicks the upload button and selects a file, we need to upload that file to the server. We also need to listen for upload progress events so we can report back to the user how much of the file has been uploaded so far.

The size attribute referenced in the following code examples is always an array of the form [width, height] in pixels.

If the user requests that the image is rotated, a request is sent to the server to action this and the response is used to update our image value and dialog.

Once the user is happy with their image (and optionally the crop marks they've placed), they click the Insert button which will trigger the imageUploader.save event. This is not the same as the dialog's standard save event which is triggered by our event handler once we have the page variation image details back from the server.

Finally we need to tell the editor to use our image uploader, this is done by updating the ContentTools IMAGE_UPLOADER setting like so:

After the user has uploaded an image we need to be able to pass the /rotate-image and /insert-image a reference so they know what image to work on. In our blueprint we're using the draft image URL and assuming that it can be used to find the original image, however if that's not possible then a unique Id  for the image could be returned as well as the URL and size. In this case the Id would be stored along with URL and size in the image object and requests to the server would pass the Id value instead of the URL.

We only send a width when requesting an image to insert. We assume that the image's aspect ratio is locked during the resize and therefore only a width is required.

Once the user inserts an image into the page they will likely place it somewhere else within the content and resize it to be more aesthetically pleasing. The ContentEdit code takes care of implementing this function in the browser but the server is responsible for physically updating the size of the page image variation.

This is why we kept an original version of the image and why the maximum width the image could be resized to the width of the original (using data-ce-max-width). Images can't be scaled up, well not without causing artefacts, and therefore the page image variation is always resized using a copy of the original image.

The Image element will trigger a taint event whenever it's changed, including when resized, so we could listen for this event against the ContentEdit.Root and send a request to the server to perform the resize. But pesky users will probably make quite a few adjustments to the size to get it just right. Image processing is a CPU intensive task and so I prefer to request the change in size when the user saves the page. This also has the advantage that if the user cancels their changes we don't have to rescind any resize requests made to the server while they've been editing.

The only real downside to resizing images on save is that the browser has to present a scaled version of the image while editing which can lead to a somewhat blurry appearance. In my experience however the effect is small and acceptable for the purposes of editing.

How do we know which images to resize when the page is saved? Well the approach I recommend is to split the work between client and server. On the client-side we'll collect a list of image URLs/Ids and widths. On the server-side we'll check to see if each image has changed size by comparing the width received from the client with that of the existing page image variation.

There's another advantage to this approach which will become more apparent later when we discuss temporary images.

The following code implements a save handler for the ContentTools.Editor that provides information about the images in the editable regions of the page and their sizes:

If you're not familiar with how content is saved this would be a good point to check out the Saving strategies tutorial.

By now you might have noticed that as our approach stands there's the potential for a user to generate orphaned images (awwww). These are images uploaded but which for some reason don't belong to a page, for example the user deleted an image they uploaded, cancelled their changes, closed their browser, had a power cut, etc.

We could cater for the first two scenarios by adding code to listen for these events but we can't catch and handle all the others - here's where temporary images come in. A temporary image is just like any other image but we mark it in some way as temporary, for example it might be stored in a tmp/ folder or flagged in a database table. Temporary images have a limited lifespan; once uploaded, unless the image is subsequently marked as not being temporary, it will be removed after a given period of time.

Any image uploaded during the editing process is considered temporary until the user saves their changes, at which point those images should be made permanent. The save event handler from the previous section Resizing images comes in handy now as each URL in the images parameter sent with the request can be converted to a permanent image in the server-side handler (if not already).

The final task we're going to cover is what to do when a user removes a previously saved image. There are two approaches I recommend here:

To perform the search server-side, loop through each URL in the image parameter sent with the request and search for it within the existing HTML. If the URL cannot be found the image should be deleted.

If you're using an Id other than the image's URL then you can either:

Whilst I've done my best to make supporting images sound like a royal pain in the behind, it's all too often a crucial feature for users and they matter the most - so suck it up.

Alternatively you can checkout the Image uploads with Cloudinary tutorial which (with a few caveats) makes the process almost effortless.